The Bûche Noir is a classic French-style goat cheese.  The aroma is unmistakably goat cheese – in a nice mouthwatering way.  The taste is complex, tangy, some fruitiness with some lingering acidity.  The paste has a creamy mouth feel.  The cheese will develop more flavours as it ages and will become drier in texture.

The Bûche Noir won a gold medal at the national Dairy Industry Association of Australia Awards in 2016. 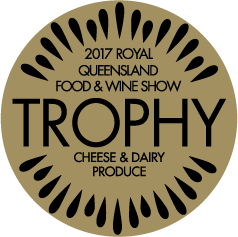 a gold medal at the 2017 Royal Queensland Food & Wine Show (Ekka).  It was also crowned the LendLease Champion Queensland Cheese or Dairy Product of Show.

Bûche is the French word for “log” and is used as a generic name for a cheese of this shape.  Noir means black.  For keen eyes, there is a grammatical error – it should be Noire.   We had only just started selling the cheese and thinking of naming schemes for the logs.  While driving up the road to drop off the cheeses at the courier company for delivery to the DIAA award judging, Peter realised the mistake. However, the cheese won a gold medal so the error has been enshrined forever.