ûche is a classic French-style goat cheese.  The aroma is unmistakably goat cheese – in a pleasant, mouthwatering way.  The taste is complex, tangy, some fruitiness with some lingering acidity.  The paste has a creamy mouth feel.  The cheese will develop more flavours as it ages and will become drier in texture.  The French word for “log”, used as a generic name for a cheese of this shape.

a gold medal at the national Dairy Industry Association of Australia Awards in 2016. The Bûche was awarded the Cheetham Salt Award for the highest scoring non-bovine product  (18.33/20). 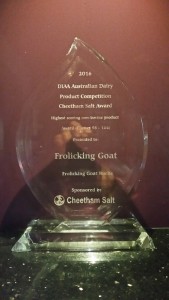 The DIAA gold medal gave the Bûche an invitation to the 2017 Australian Grand Dairy Awards.  The Australian Grand Dairy Awards are like a  final series of the gold medal winners of the larger, prestigious dairy competition.   All of the non-bovine cheeses (i.e. goat, sheep, buffalo…) are put into 1 category irrespective of the type of cheese.  Out of those, they chose 3 cheeses to go in to the final.  The Bûche made the final!  The eventual Champion Cheese of the non-bovine category was Venus Blue from Prom Country in South Gippsland/Red Hill in Victoria.

The Bûche won a bronze at the 2017 Royal Queensland Food & Wine Show (Ekka).