However, The Cheeseboard has picked up a selection today. I am about to jump in the car and deliver Jessies and Johannes’ to Rosalie Gourmet Market and Mount Cottons and Mount Gravatts to The Standard Market Company at James Street.

The Johannes’ were only taken out of the maturation room yesterday. We will make Josies and Teddys soon, when the milk volume comes back up.

If any regular customers are desperate for any other cheese and would like to cuddle some new born fluffy kids please give us a ring to arrange a time.

Somewhere along the someone has used the term “Rolled in Ash” to describe how the ash gets on a log of goat cheese. The pyramids would be harder to roll, I would think. This must have come from TV and has got out and become an urban myth. I regularly get asked the question.

Anyway, I thought I would demonstrate it. I knew it wouldn’t end well. Sometimes I apply too much ash. Anyway, in the name of science… 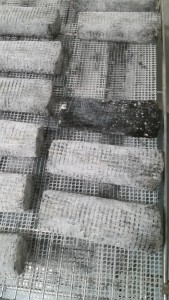 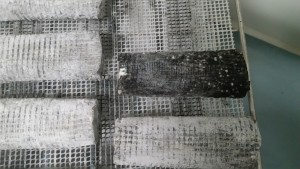 The ash has been carefully applied to the other cheeses 🙂 Rolling might work on fresh curd, un-matured cheeses. The only rolling that happens at Frolicking Goat is when some rock ‘n’ roll comes on over the music speaker in the factory. Maybe we should roll some fresh curds…

In France, I had the opportunity to go to the town of Valençay and buy and eat a Valençay cheese. I also went to a farm and bought a Selles-sur-Cher. Similarly, with Chabichou de Poitou, Mothais sur feuille and other goat cheese. I also drank Vouvray in Vouvray. You can now go to the newly opened, massive IGA at Mount Cotton and buy a Frolicking Goat Mount Cotton. The other cheeses in our signature range are also available. The Mount Cotton IGA has a very impressive deli with a cheese room and 2 cheese barges. 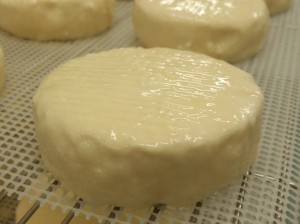 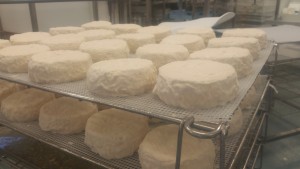 Halloumi is a salty, brined unripened cheese originating from Cyprus. In Greek it is Halloumi, in Turkish it is Hellim.

Halloumi is traditionally made from a mixture of sheep and goat milk.

The Cypriots have attempted to try to obtain PDO certification for this cheese. However, I believe, this has been unsuccessful. There will be enough bickering with the larger companies trying to include cows milk in the PDO. Objections have been sent from Dairy Australia, British cheesemakers, US, Turkey and Kuwait. This might drag on.

So we will stick with name Halloumi for now.

Up until recently only our friends and family have enjoyed Halloumi made from our beautiful milk. In recent weeks we have occasionally had some Halloumi available at the markets.

Response to our Halloumi tastings at the markets has been very positive. People with Greek, Cypriot and Turkish backgrounds have made very positive comments about the authenticity of our version of this cheese.

We are also producing a marinated version of Frolicking Goat West End – i.e. marinated Feta-style cheese. This cheese is packaged in a glass jar with a gold lid. The cubes of cheese are marinated in a mixture of sunflower oil and olive oil flavoured with thyme, oregano, mint and a touch of lemon. Due to the yellow colour of the oil and colour of the lid we have decided to call this cheese Frolicking Goat Gold.

Peter and Lyndall have head-butted over the marketing suicide of what we name this cheese. Peter grew up in a Greek area of Sydney and has a lot of admiration and respect for the Greek people. Just think of contributions to the world such as Pythagoras’ Theorem and other mathematics, democracy, philosophy, genuine Feta…

We recently introduced our feta-style cheese at the Markets. We attempt to make the cheese as close as we can to a Greek Feta. Obviously, it can’t be the same.

So how do we get a regional name…what is the Greek area of Brisbane? We name this cheese Frolicking Goat West End.

Initially, it has been packaged as cubes brined in glass jars. We will probably be vacuum-packing it as it is often done in Australia. Larger quantities might be sold in plastic containers containing cheese and brine.

Frolicking Goat West End is available from our market stalls.

Many of us are aware that sparking wine produced outside of the Champagne region in France should not be called Champagne. Similarly, the regional name Hermitage has been replaced by the grape variety Shiraz/Syrah.

This is due to the French certification system of Appellation d’origine contrôlée (AOC) – “controlled designation of origin”. AOC certification for a wine, cheese or other food specify the region the product is made in, the soil types, the raw ingredients (e.g. grape varieties, type of milk or even breed of animal), how it is made and much more. This factors influence the uniqueness of the product. Some of this is the basis of the French concept of Terroir.

The Italians have similar systems of DOC and DOCG.

There is also a European system of Protected designation of origin (PDO). For French products, my reading tells me that some AOC certified products have been promoted to the wider coverage of PDO certification.

in 2002, Greece won a long battle to have Feta protected as a PDO product.

The PDO specifies that Feta is a brined white cheese made from a minimum of 70% ewe’s milk and 0-30% goat’s milk.

The geographical zone in which the milk is produced from which Feta cheese is made is defined by the administrative boundaries of the following areas:

It is prohibited to use milk from areas other than those stipulated above in the preparation of Feta cheese.

In order to make the latter white, various colourings are added to the milk to be made into cheese; apart from the fact that these are not natural components of the milk, moves are already being made at Community level to prohibit their use;

The PDO document also describes that Feta is not made using ultra-filtration. Basically, ultra-filtration is the pushing of milk through a very skinny tube and/or membranes. The liquid that comes out the end is permeate used by by cow dairy to standardise milk. The remaining thicker mixture is used to make cheese in the style of what is known as Danish “white brined cheese”.

For more PDO specifications on other products you can search the http://ec.europa.eu/agriculture/quality/door/list.html.